Recently I visited the Cheltenham Design Festival as part of my ongoing education into art and design.

The structure of the day meant attendees had to choose between a selection of great workshops and presentations and I found the day incredibly interesting and inspiring.

Here are the top ideas I heard/learnt today:

1. Infographics Are Not Dead

Which is just as well!

I was starting to get a little nervous. Not only has the infographics world been inundated with tacky, cheap and low-value infographics, but this mashup of content and design seems to have very low credibility within the design field. (Is it considered a low-brow artform? Or are graphic designers simply not interested in the presentation of content literally?)

One of the sessions I attended covered viral marketing, newsjacking and how to make your content “stickable” – the session was appropriately called “Super Sticky Snackability” presented by Jon Burkhart from Urgent Genius.

Following the session I asked Jon, as he had briefly touched on the subject, whether the influx of cheap infographics had killed them. Thankfully Jon backed up my feelings, that there will always be a place, but the content has to be strong, but also that interactivity is perhaps a still under-saturated area. He added that it’s very hard to kill something, despite claims to the contrary (TV and print live on, for example despite the death knell!) 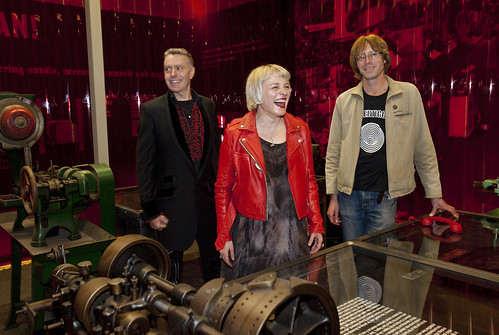 I love what I do, but it’s often easy to get caught up in deadlines, and the process of what you’re doing, and forget all that. So it was great to see how much passion surrounds the design industry, but the subject of having fun was covered heavily by two of the speakers. First, Morag Myerscough (site) (pictured left) during her presentation “Design can create belonging“.

It’s hard not to be cheered up by her vibrant design work but it was great to sense her genuine passion and joy about her work, and see photographs of her laughing with work colleagues as she actually gets her hands dirty doing the painting work on her huge scale projects.

The second dose of “loving the job” came from Nick Eagleton from The Partners. His background was strongly founded in exploratory arts (including some adventures in taxidermy, wire sculpture and studios within studios) although now he has a more structured branding role. However, his sheer joy at being able to bring his passion for surprise and exploration in design was evident – keep it fun!!

He explained how he was sent to the Falkland Islands to research the design for a new standards logo for produce from the island. Prior to his trip, the team had developed a series of logos all featuring the penguin, a well-used icon in Falklands merchandise. It appears on mugs, websites, hats and mittens!

However, when Nick arrived in the Falklands and began speaking to the locals, he realised quickly that they all hated the penguins, for the simple fact that they’re noisy and crap everywhere. This was made worse by the fact that cartoon penguins appeared everywhere.

Instead, Nick went for a more natural approach, and used the windswept grasses, indigenous to the island, to demonstrate it’s unique weather conditions. Without that trip to the Islands, the logo would have featured a penguin, and not been popular, if it had been taken up at all.

From this, I’m going to endeavour to spend more time getting to know my clients and, if possible, meet in their offices to get a feel for their “brand” and get people more engaged in my work.

Which brings me to …

“The IKEA effect is a cognitive bias that occurs when consumers place a disproportionally high value on products they partially created.[1] The name derives from the Swedish manufacturer and furniture retailer IKEA, which sells many furniture products that require assembly.”

In short, if someone get’s involved and places some input in your project, they’ll think it’s better than it is.

This concept was mentioned during my first session of the day, by Tom Roope from The Rumpus Room.

His company focuses largely on crowdsourced material, which is curated and moderated to create interesting pieces of work such as the Lily Allen video – below.

This not only makes a catchy video but imagine – every single person who appeared in that video probably shared it with their friends – who most likely shared it themselves!

The hint here is that getting people involved in the process is a sure fire to get them on board. Yet another reason to get out of the office more, and into my clients worlds!

I must confess, I’m not a natural collaborator. Ask anyone who’s worked with me back in my radio days, and they’ll tell you I’d rather do it myself than delegate or collaborate.

And that still stands for work I can do myself (which is one reason I’ll probably never employ someone to do the same role as me). However, that shouldn’t stop me working with people with different skills.

Morag Myerscough covered this during her presentation – explaining the thinking behind Supergroup ,which sees a collection of designers, with varying skills, pool their resources to work together on projects that they’d be unable to take on alone, due to requirements or sheer size.

It’s a smart move. I’ll be collaborating with some developers over the coming months on the My Route project, and I can certainly see the potential of gathering a stable of techies, developers and perhaps statisticians to boost my business model.